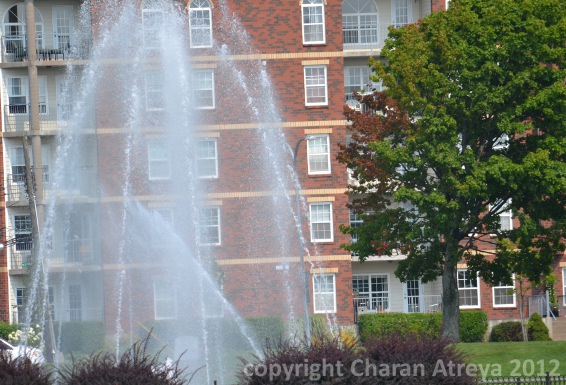 Introducing agility into traditional systems development processes is never easy. Firstly, you have got to want to change. Secondly, you need to have a vision of what to change to. Finally, you need the tenacity to forge ahead in the face of stiff resistance. It is usually the third that is the most difficult journey to undertake. The hardest part of the journey is during the transition wherein you show how to bring agility into executing projects. You are walking the fine line between traditional methodology and incrementally introducing change.

One of the challenges during the transition is the question,” how do I know if the project is on track?” Despite all the conversations around introducing agility, when the rubber hits the road, it always comes back to “are the tasks on the critical path late?” or “what’s the project CPI and SPI?” or a variation thereof. Critical path and earned value concepts are deeply ingrained into our psyche. It is not easy to let go.

I prefer to lead change by piloting. It is not enough to just talk about agility. You need to prove over and over again to the different groups that agility and flexibility can be introduced into any systems development project and not just software development ones. In fact, it can be used in any project subject to the constraints of the deliverables and the cost of change of these deliverables.

But I had a plan. I knew I was going to use a visual board to begin with. I also knew I was going to limit project WIP within my team. (It is a not a Kanban system until you limit work in progress (WIP)). However, because none of the team members were dedicated to the project, I knew the project would probably get the short end of the stick in terms of prioritization of work. I also did not want to wait for weeks or months to start getting feedback on deliverables. Given the constraints, how could I bring more agility into this waterfall project? This nagging question coincided with my vacation plans. Needless to say, I traveled with this question as I embarked on my sojourn.

GPS to the rescue

Like any contemporary long distance road warrior, I never leave home without my trusted GPS. The device faithfully prompted us at every turn. Here’s some of the information my GPS provides:

The estimate to arrive (ETA) was our drum. My speed, the frequency of stops and the length of the stops was all driven by the ETA. If we were stuck in traffic or were delayed, we could call the folks we were meeting up with and either changed the location or adjusted the time of the meeting. As I was mulling about my project one evening, it hit me:

“Just like the GPS in my car, I just need a simple indicator that will tell the team and how late or early we will be based on the current travel speed?”

I decided to explore the options available to me and see if it would fit my needs. I wanted to keep it simple. Critical chain can accomplish this. Adopting critical chain, however, requires a significant change in the mindset. Moreover, the team and sponsor needs to accept that every task has contingency built in and once identified they won’t be cut. I have had sponsors try to take away the risk contingency on my projects. I decided critical chain would not work here.

I could use Velocity. Velocity is the speed at which work is completed; i.e. distance/time. The distance is measured as story points left to be completed. The speed is the number of story points completed in the last iteration or it could be an average of the last few iterations. But using velocity requires a reasonably good estimate of the effort. Moreover, my goal was to achieve a continuous flow – I did not have sprints. Moreover, adopting a Scrum approach would mean a significant leading change and something I did not have time to do.

All I had was the waterfall process over which I hoped to lay the Kanban board over to help incrementally change. But the concept of velocity had merit. I wondered,” What if, I could use another variable instead of story point estimates? What if I substituted story points with the count of project tasks?” Something worth exploring!!

I scheduled the project using traditional waterfall practices. I decided to add the following stages to each task: Requirements, Design, Build, Test and Deploy. Since the WBS was being built in the traditional way all tasks did not evenly flow through all these 5 stages. But this was a good start and I planned to introduce the team to concepts of user stories as we progressed.

Task sizes on waterfall projects are typically large. The PMI says the WBS task should be about 40 hours of effort – but in my experience they are anything but. Moreover, there is significant variation in the task size. Some tasks can be as small as 2 days effort while the other can be over 3 weeks. This creates a significant variation in the completion times of project tasks. I decided to make the impact of this variation visible.

If I consider the number of project tasks as the distance to be covered (as an alternative to the effort or story point), then the distance to be covered (number of tasks remaining) divided by the current speed (tasks per day actually completed) would give us the time (number of days) it would take to complete all tasks. Adding this time to today’s date would give us the projected end date at current speed of completion. By comparing this projected end date to the planned completion date, we would know if we are going to be early or late and by how many days.

In search of a Leading Indicator

If I only calculate this measure when tasks close, I have a lagging indicator. So how can we get a leading indicator? As each day passes without completing tasks, the rate of task completion should decrease. This rate when divided into the number of tasks remaining to be completed should increase the time it takes to complete all project tasks. This should push out the projected project completion date. On the other hand, when I complete tasks, the rate of task completion should increase and this in turn should bring my projected project completion date in.

With each passing day, if I could tell the team where the project stands, then I’ll be able to get them to focus on this project. Here is how I came up with predicting the project end date range based on the number of tasks: 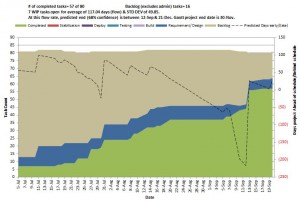 The adjacent graph is a sample from the project timeline. You are all familiar with the cumulative flow diagram. I have only shown the backlog, requirements/design and completed queue. This is on the primary Y-axis. On the secondary Y-axis, I plotted the number of days the project is expected to be behind schedule or early.

The other information I showed on the graph was the count of tasks completed and the total number of tasks, the backlog, the count of WIP tasks and how long these tasks are open for along with the standard variation. So based on the above logic, I also show the expected dates within which the project is expected to close. I also show the originally planned end date for comparison (the clock on my calculation has not stopped ticking and hence it shows the average of 117 days for the WIP with a high standard deviation. Going back to change all the formulas was tedious and hence I left it as it is. But this should not effect the understanding of the concept.)

WIP in July ranged from 6 to 13 as you can see. It took us an average of about 7 to 14 days to complete them. You can see the effect of not closing tasks in the dashed line. We kept trending down until we closed a bunch of tasks towards the end of July. As we got better at closing off tasks we got into a bit of a rhythm in August as an be seen by the sawtooth graph then. But we went off the rails by the end of August and early part of September. Other non-project priorities took precedence at this stage and we were not able to complete project tasks. The daily completion rate dropped from 1.54 on July 31 to 0.13 in Sept. And you can see its impact on the projected project end date.

Making this visible to everyone in the team 3-4 times a week increased the sense of urgency. Some of the observations through this exercise:

A reason given to me by one of the change resister was, “Every task has different estimate to complete, and hence duration will be variable. This method will only work if every task has the same amount of effort and people are dedicated to the project. For a project with varying task estimates and duration, this will never work.”

This reason misses the point entirely. It is because of varying estimates and that I think we need some method like this. There is very little we can do about the variation. Systems development is a discovery process wherein the team uncovers new information as they progress along. The tool just shows the impact of these variations. As a project team, you now have to decide on how to act on this projected information.

We were able to keep the project on track despite the lack of dedicated people on the project. We were also able to get the team to take ownership of their respective tasks with very little follow-up. This, in my opinion was the most important benefit of using this measurement system. The team was able to adopt the principles outlined in the Agile manifesto using this tool. We were able to adapt to collaborate as a team and adapt. Every time, the projected end date started to creep up to the planned end date, the team rallied together to help each other out.

What do you think? Does this make sense? Agree? Disagree? Feel free to drop me a note to give your opinion.

4 thoughts on “Transforming from waterfall to agile”